Clinical Significance of the TUG Assessment 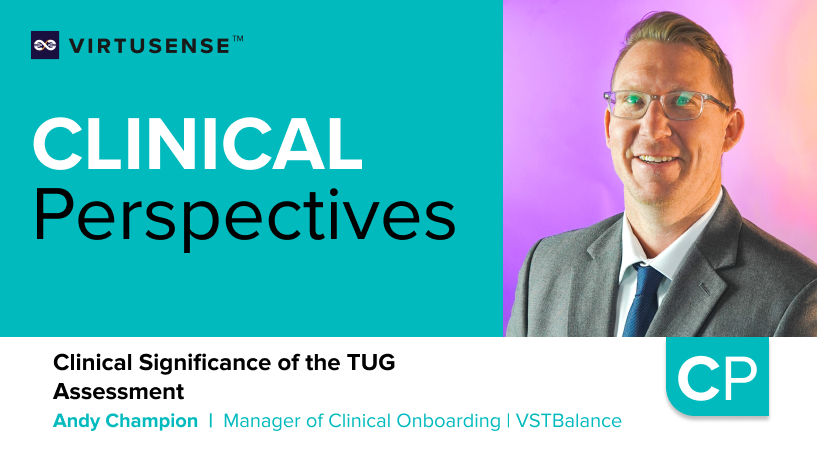 What is Fall Risk?

TUG or Timed Up and Go is a standardized screening tool designed to measure the mobility and fall risk of older adults. It was originally introduced as the “get up and go” in 1986 and later modified in 1991 to improve inter-rater reliability. The TUG has since become a mainstay in therapy clinics to aid in measuring balance and mobility due to its consistency and ease to perform.

The TUG combines multiple complex movements that a person must perform regularly throughout their daily activities. First, the person must move from a sitting position to a standing position. Then, they must walk 10 feet (3 meters), turn around, return to the chair, and sit once again. The test ends when the person sits down safely. An illustration can be seen below.

The TUG is a timed test and is scored on time alone with no other objective measures. Below is a list of cut-off times1 (measured in seconds) for increased fall risk within a specific patient population. 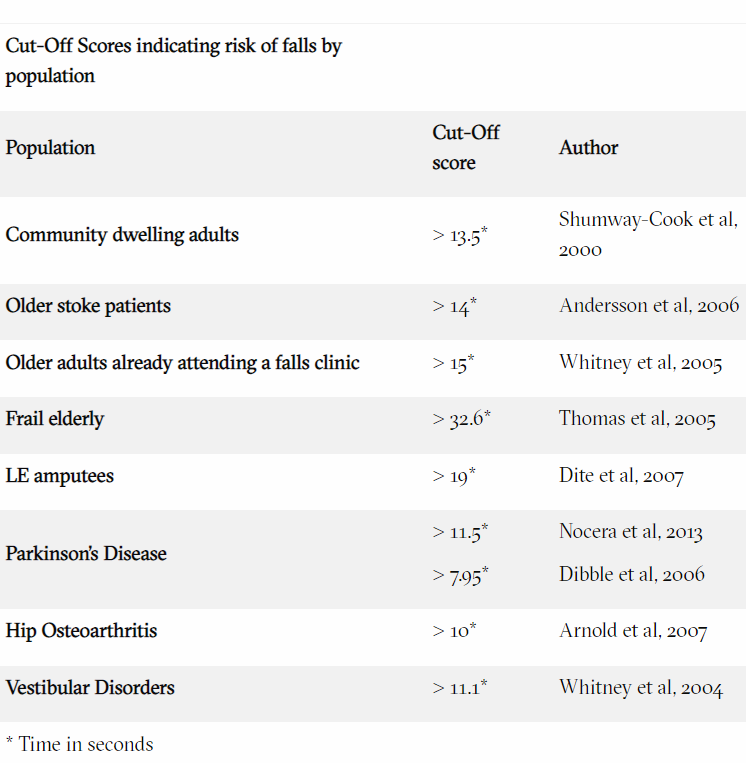 The TUG has been well studied over the past several decades. In many cases it had been synonymous with fall risk and safety as it combines functional sit-to-stand activity with ambulation and dynamic turns. Recently, the validity of the TUG has been questioned regarding its ability to accurately predict falls. Several studies have indicated that the TUG and its “cut-off’” scores are more reliable in predicting functional ability as opposed to fall risk.

While the research suggests that the TUG is no longer the Gold Standard for fall risk, it is still valuable at ruling in rather than ruling out falls in individuals classified as high risk (≥13.5 seconds), by applying a higher pooled specificity than sensitivity.

Sensitivity versus specificity can be very confusing. Highly specific tests have fewer false positives, so they more accurately identify high fall risk. In the case of the TUG, a positive test is considered above 13.5 seconds. This suggests that anyone above 13.5 seconds can be reliably considered at a higher risk for falls. To further illustrate this point, see the chart2 below. 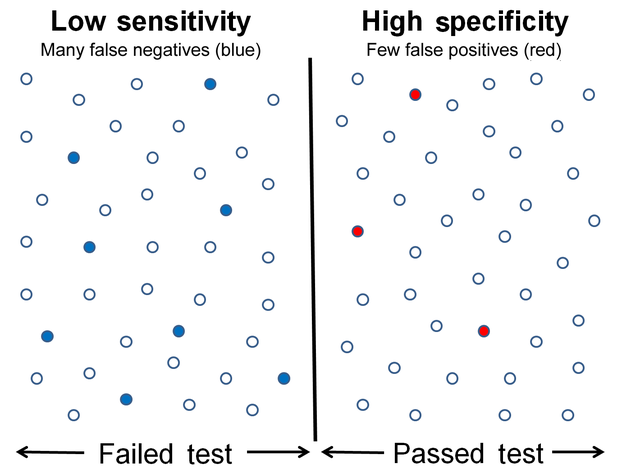 However, the cut-off of 13.5 seconds should not be the sole determinant for fall risk. According to the review, while a TUG score of 13.5 seconds or more could rule in the risk of a fall, a score of under 13.5 seconds could not rule out the risk.

Even though the TUG is unable to fully rule out a fall risk, it is still a valuable screening tool. Healthcare professionals should be aware that a single test shouldn’t be the determinant to assess fall risk. Instead, two or more tests should be performed to ensure both sensitivity and specificity are included in the testing parameters.

As always, other subjective and objective assessments should also be under consideration when evaluating fall risk. Other factors can affect the results of a TUG and include the person's mood, cooperativeness, medications, energy levels, and fluctuations in blood pressure or blood sugar.

By utilizing technologies like VSTBalance, clinicians can identify mobility deficits in older adults to determine if they are at risk of falling within the next 12 months. The VSTBalance system includes the TUG assessment. VSTBalance uses AI during the TUG test to collect hundreds of data points including gait speed and cadence. These additional data points help clinicians determine the best course of treatment to improve overall function and stay healthy. Regular assessments with VSTBalance ensure that patient progression can be tracked with confidence.

What is Fall Risk?

VirtuSense Named as a Tech Company to Watch by BuiltIn Chicago