The Real Cost of Bedside Falls

The Real Cost of Falls - VirtuSense

Every Second Counts in Skilled Nursing

The reality of falls is a sobering concept for hospitals, senior living, and assisted living facilities everywhere. Residents that fall and injure themselves increase the odds of premature death due to health problems associated with falls. Beyond that, the facilities where they are staying have a lot to be concerned about — cost-wise.

How much does a fall cost?

In 2007, direct and indirect costs due to falls totaled over $19 billion. In 2015, the cost rose to $31 billion.  Over 8 years, the cost of falls rose $12 billion, and continues to go up. Costs don’t end with the fall itself; they continue to increase when ongoing health problems occur over time, or worse, when death occurs. In 2007, $179 million was spent for fatalities following a fall (1). Additionally, in 2015, medical costs resulting from fatal and nonfatal falls were around $50.0 billion. Regarding nonfatal falls alone, Medicare paid around $28.9 billion, Medicaid $8.7 billion, and private and other payers $12.0 billion. Comprehensively, medical costs for fatal falls was around $754 million. 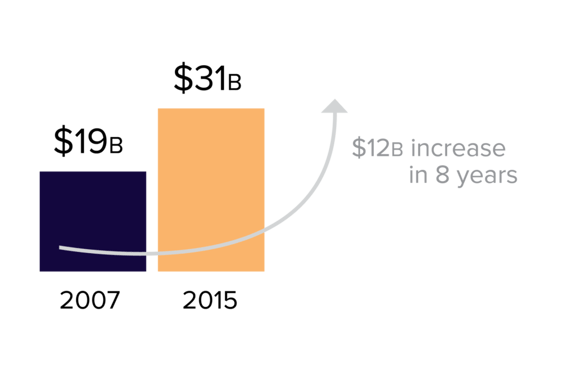 What’s included in the cost?

Cost goes beyond initial injuries and liabilities. Hospitals and nursing homes have to worry about direct medical costs like facility fees, as well as doctors and other necessary professional services, prescription drugs, the use of expensive medical equipment, and more. The numbers don’t end there—when patients suffer long-term effects from a fall, hospitals have to pay for consequences like disabilities, poor quality of life, and loss of earnings. Healthcare workers have been eagerly working to reduce falls since 2008, when hospitals were no longer paid to treat injuries that resulted from hospital falls. This decision was made by the Centers for Medicare and Medicaid Services.

What are the statistics?

So, who is falling? How can healthcare workers understand the problem better so that they can actually reduce falls? According to the Journal of American Geriatrics Society, from one study of those who fell, 52.1% only fell one time, but 21.3% fell twice, and 24.1% fell three or more times. Income, gender, and age seemed to play a role, as the majority of those who fell were older women of lower income. Another contributing factor to the likelihood of falls seemed to be the patient’s perspective of their own mobility. Those who fell were asked to self-evaluate their health, and many rated themselves on a low level. Many also suffered from chronic disease. 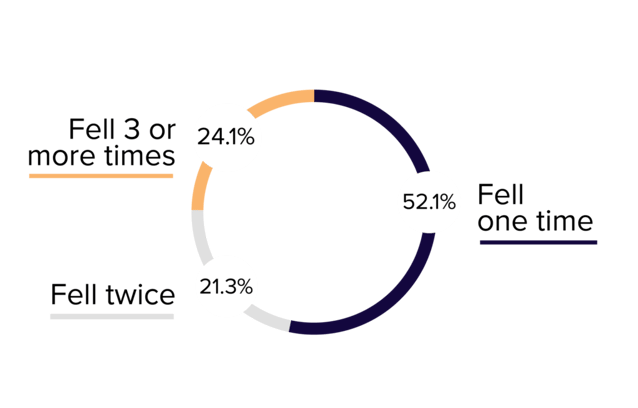 How do we stop bedside falls?

So, what’s the solution? Many hospitals are turning to AI-based solutions to prevent falls because of their ability to predict and prevent, rather than react to the fall while it’s happening. One of the leading solutions on the market currently is VSTOne, an infrared sensor that is able to detect movement and patterns to predict falls, giving nurses time to respond before a fall happens. VSTOne reduces false alarms and proactively detects bed exits at a fraction of the cost of alternatives with no setup costs. It works directly with hospital or senior living staff’s smartphones, or integrates with other endpoint devices already in use at the hospital.

The Real Cost of Falls - VirtuSense

Every Second Counts in Skilled Nursing

AI is Leading the Way in Fall Prevention in Acute Care